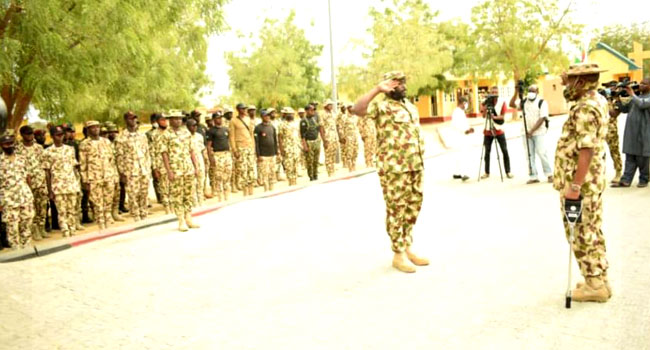 Troops of Operation Lafiya Dole currently carrying out Operation Tura Takaibango stationed at Dikwa and Gulumba Gana supported by the Air Component inflicted heavy casualty on Boko Haram Terrorists who attempted to take control of the strategic town of Dikwa, the headquarters of Dikwa LGA of Borno State.

This is according to a statement by Brigadier General Mohammed Yerima, Director Army Public Relations.

General Yerima stated that the terrorists in their numbers mounted on 12 gun trucks attacked the town on the eve of Sunday 18 April 2021, just as the locals prepare to break their Ramadan fast for the day.

READ ALSO: Boko Haram Is Not In Control Of Damasak, Army Insists

“The troops having contained the initial wave of the attack had to occupy their alternative Headquarters at Gulumba Gana to enable the Air Component engage any gun trucks and other technicals in the vicinity of the attack to prevent fratricide. The troops launched a counter attack in the early hours of Monday 19 April 2021 and successfully reoccupied their main headquarters in Dikwa.

“The retreating terrorists suffered heavy losses in both equipment and personnel including some of their key leaders from the superior firepower of own troops both from the air and ground forces. The troops are currently patrolling Dikwa town and environs to assess the level of damage inflicted on the terrorists,” the army’s communique partly read.

It further noted that the Chief of Army Staff Lieutenant General Ibrahim Attahiru has commended the troops for their doggedness and directed them to restrategise in order to prevent any further attacks in the area, adding that the Nigerian Army remains committed to ensuring a safe and secure environment through out the North East theatre.

Smoke billows from an Israeli air strike on the Hanadi compound in Gaza City, controlled […]