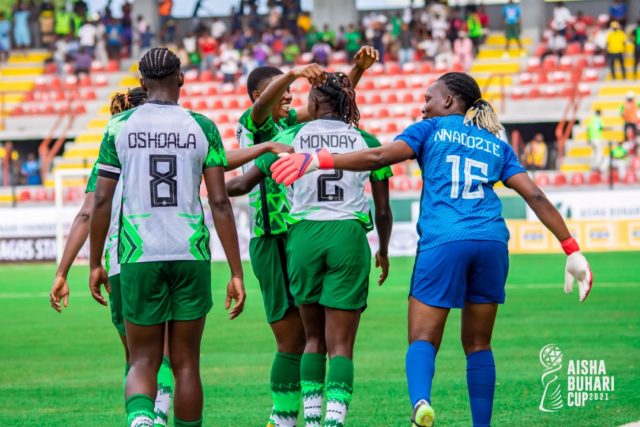 The Director of Organisation of the Aisha Buhari Invitational Tournament, Aisha Falode, has congratulated the Super Falcons and heaped praises on Monday Gift for scoring the two goals that gave Nigeria the much deserved victory against unfamiliar foes, the Eagles of Mali in the opening game of the Aisha Buhari Invitational Tournament at the Mobolaji Johnson Arena, Onikan, Lagos.

Falode, who is also the Chairperson of the Nigeria Women Football League, noted that, what Monday Gift demonstrated with those two goals after she came into the game as a second half substitute, was share determination and the ‘never say die spirit’ in the Nigeria Women Football League Premiership, where the greatest revolution in the Nigeria women’s football league was witnessed at the last edition of the NWFL Premiership Super Six played at the Dipo Dina International Stadium, Ijebu-Ode.

“The FC Robo of Lagos captain just put the icing on the cake and confirmed that the massive development in the Nigeria Women’s League was no fluke.

Falode, who is also a board member of the Nigeria Football Federation, also used the opportunity to thank the First Lady, Her Excellency Dr. (Mrs.) Aisha Buhari for giving Nigeria the opportunity to be the first African host of this calibre of the women invitational tournament, the Lagos State government, the Sports Minister, the NFF president, CAF president and indeed FIFA president, who were all present at the opening ceremony, not leaving out the Minister For Women Affairs.

She commended the Local Organizing Committee that gave their all for a wonderful start to the tournament and the Super Falcons for making the event graceful with a fantastic result in the opening day.

The tournament continues today until September 21, 2021.

The 16 teams, which comprises of teams in Nigeria and neighboring country Ghana were today […]